Just ran across information about a 5K in June to Benefit the Kenton County Kentucky Library. Go to http://www.kenton.lib.ky.us/race/index.html for more info.
Posted by BookLady at 3:29 PM No comments: 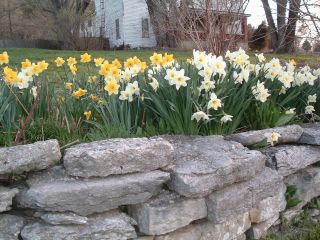 A Riot of Daffodils along the wall

The daffodils are blooming their heads off this year.

I just finished Nights in London by Thomas Burke. He strikes me as being one of those rather precious young brits. It was first published in 1915 and the "popular edition" I read was done by Henry Holt Co in 1918 so it's from that timeframe just prior to The Great War. Essays on his rambles through the neighborhoods of London. Without knowing his biography I would guess he was a newspaper writer of the era.

Cousin Amy was here this week and listened to Graham Greene's The Quiet American on tape during her trip down. She highly recommends it, I was surprised to find that we have none of his work in the shop.

I'm still working on catching up with the New Yorker backlog. Almost through Mar 21st.
Posted by BookLady at 10:07 AM No comments: